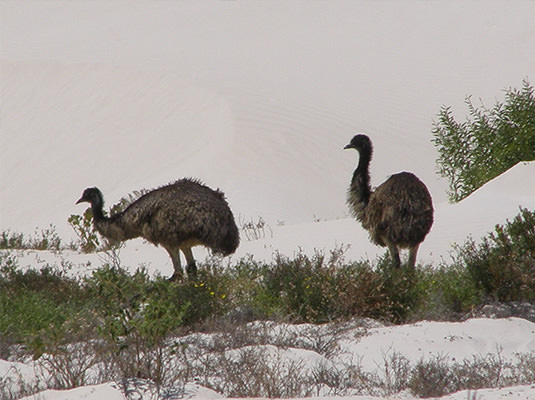 Where else can you find a communal pet emu? Wedge. Lager had an owner but he rather liked to tour the flats and visit everyone else than stay at home.

I have fond memories of him coming to lunch everyday popping his head in the shack window for a sample of our food. He loved the colour yellow and would follow you around trying to peck the yellow head elastics from your hair. 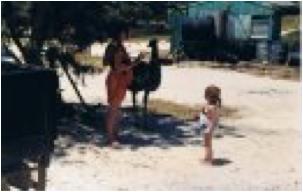 When the tourist buses used to come through Wedge Dad used to put chunks of cheese on his hat- hidden from tourist’s eyes- and Lager would follow him around pecking the top of his hat.

One night at a party at the Hollow Log two camels arrived in the middle of the night. The camel popped its head around the corner of the shade cloth and scared the crap out of everyone sitting down. They ended up staying the night on the front lawn and we enjoyed a ride the next day. They were following the route of the explorer, Grey.

Meeting the parents and friends

Wedge certainly is only for some. Wedge and its people deterred some and kept some keen.

Joining of the island

The joining of the island to the mainland is something amazing. It seems to happen in cycles. Being able to explore the island as part of the mainland is great. While some years having it as an excluded Island kayak around or snorkel is equally as special

To the north of Wedge Island is or was known Flat rocks. One day the limestone crumbled and its now rather Jaggered rocks. There are heaps of seals living around these rocks and is great to see by boat.

When I was a child we had a fishing competition every year. I especially remember this because I was only 4 years old. I felt the fish on the line and told everyone I had a fish on the line. No one believed me and I was left to pull in a massive Dhu fish. I ended up winning the biggest fish for under 14 and of the competition. A certain local still tells that story to anyone who will listen!

Wedge has provided me with a very large extended family. I met so many wonderful people growing up. As a child I started of schooling by distance education living at Wedge Island. The weekend’s were so exciting when other people would come up. Every weekend I met someone new. After I started school in Lancelin, travelling from Wedge to Lancelin every Monday morning and back Friday afternoon I looked forward to being at Wedge, and still meeting people.

During school holidays were would all hang out and by the time we were in our early teens there was a good crew of us. This crew still is still together with a few more added in.

Money couldn’t buy the friends I have made in Wedge.

Three of us who were at Wedge as young children either completing distance education or going into Lancelin for school had vacation swimming lessons during school holidays. This was always an experience. Our parents would take it in turn to take us down for the day. I remember one day going the beach and all having our windows down going around Magic when a massive wave hit the car and drenched us.

The track and beach

Before the times of the Indian Ocean Drive there was the track and beach. What fun. At a quick calculation I have done that track at least 2000 times. This is a track that was classed as hard core four wheel driving! Some swear never to do it again! The beach was equally as fun and it was always a joy when the beach was wide and you could cruise down. Many night trips we would stop to go Taylor fishing or cobblering.

I have heaps of stories of people we have rescued from bogs and the track. My two favorite are one of my friends and his mate had headed to Wedge and were near the Coke can when they ran out of fuel. For some reason the gas wouldn’t change over so they trekked it into Wedge. Once we got back out there I stuck my head in the van suggest to twinkle a wire and it changed over to gas. All that walking for that one little thing. Lucky he is an electrician now!

A recent rescue was of some Asian guys in there skyline on the dozered track that was to become the Indian Ocean Drive. They walked into a bonfire at the dunes and said they were stuck out the back. We followed the track out and found them way past north rocks. It was rough as guts and we were amazed they had made it that far in their 2WD drive car. We got them back to Wedge and sent them on their way they next morning. It’s all about the ying and yang and karma.

The navy range provided us with much entertainment. From disused Army ration packs and accessories to the tanks coming through Wedge. The ship to shore bombing shook us and the planes sometime got us by surprise.

Christmas at Wedge was wonderful. It was also the start of the summer rush of friends. On Christmas Eve we had a Christmas tree where Santa would arrive and hand out a present. I was a child receiving the present, then Santa’s little helper, and then I got to see my son sitting on Santa’s knee. I remember working out who Santa was by the tear under his eye. We had so much fun getting our presents and then meeting up and playing on the flats with our new toys

During winter the flats flood and it becomes an inland sea. One winter we hopped into a canoe at the ice shack and rowed to the main beach cutting.

Jinkers and the off season

The cray boats used to come ashore at Wedge and be serviced during the off season at Wedge. They used tractors and jinkers to get them up and into Wedge. It was always heaps of fun riding down to the beach on the jinkers. I have fond memories of a number of the deckies that have worked at Wedge Island. From helping painting floats and coiling ropes, to just annoying them in the pot shed.

Nearly every shack has a carpet snake hanging in the rafters; any unwanted guests were normally taken to one of the pot sheds to live. The local skinks also manage to scare a few. They can get up to nearly 2ft and are very shy lizards. We had them in the Hollow Log and they would come out at lunch time. They would act like a crocodile and death roll a piece of tomato or meat.

Some other memorable times

One Christmas Day my sister was due to have her baby the next day. She came over to Christmas celebrations in the late afternoon to announce she was in labor and off she trundled to Joondalup. That made for even more celebrations that evening. The following year we had her wedding at Wedge Island on the front lawn of a shack and then a sit down meal in my sister’s shack’s backyard.

After a shark was caught and bought to the shack for cleaning it was a surprise to find ALIVE baby sharks inside. It was quite amusing and a friend and I took them back to the beach. They would have been lucky to survive after the trip back to the beach on the farm quad.